This section is important for Server solution. Cloud users need not worry about any of this.

If upgrading from version 11 or lower, please refer to release notes for 12.0 as well.

Widely requested feature has been finished in this version. The relevant custom fields formats can be viewed or used by helpdesk users.

There are two new options on task custom fields. 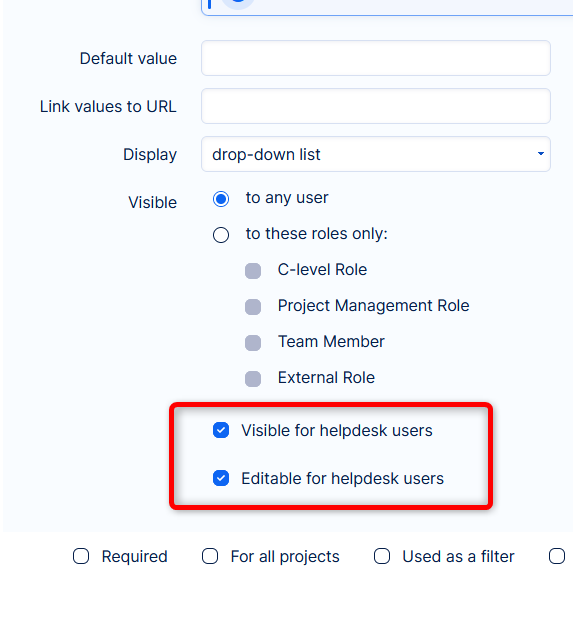 IMPORTANT: Make sure that the custom fields are enabled on the projects and trackers used by the helpdesk users.

This option is only in GitLab integration for the moment.

When this option is enabled, users in Easy Redmine can only see data from GitLab projects, where they are members. When the option is disabled, the behavior remains as before (all users can see all git projects data from the whole instance).

are available as filters, columns and group by attributes.

Now
The task that is referenced is validated. Only if the user (commit/code request author) has permission to edit the task will the task be edited.

In case the user attempts to edit task beyond his permissions, the user will receive and email message with prompting to verify the referenced task ID.

Referencing task would not work when adding full URL of the task (e.g. https://myeasyapplication.com/issues/1234), even if it was set in referencing configuration. Works again from 12.2.0