Items in project budget and overviews

Items in project budget and overviews

Items in project budgets, portfolio overview and cash flow report have been renamed to better reflect their meaning. Here are explanations of all the items.

Starting with a view on budget of a single project. 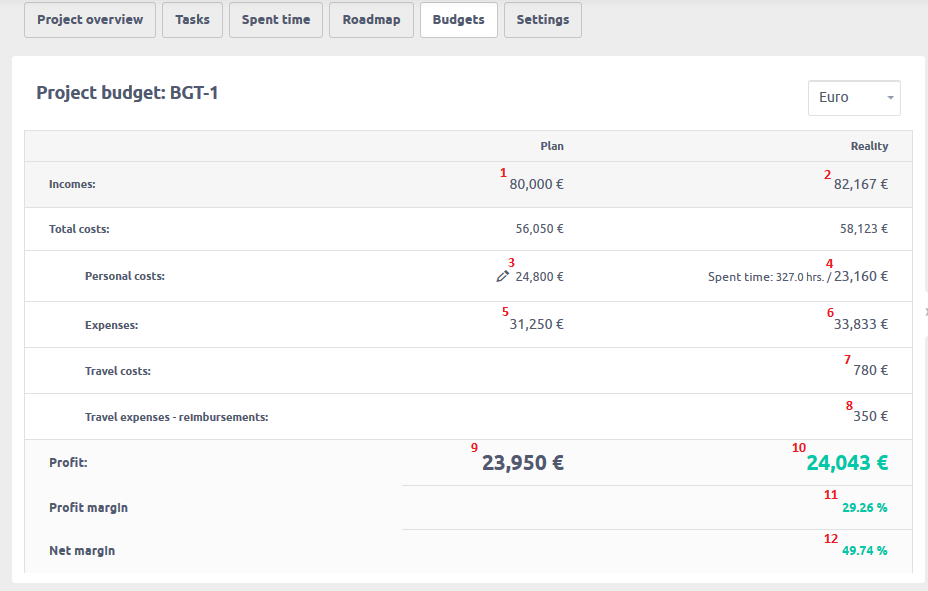 1) Planned incomes - Incomes entered in the planned budget. Amount may be shown including or without VAT, according to the budget setting

2) Real incomes - Incomes entered into the real budget. Amount may be shown including or without VAT, according to the budget setting

4) Real personnel costs - spent time * hourly rate. Cost rate settings are explained in detail in the related post. In project budget, this item is shown according to the budget setting

It is recommended to use internal rate here. External rate is mainly considered as the amount you are billing to the customer.

Expenses can be understood as "other" costs. Amounts in this section may be shown including or without VAT, according to the budget setting

Travel items are not represented in planned budget. Rough estimates for travel items can be put into planned expenses.

11) Profit margin = Profit  / Incomes. It is the proportion of money left over from revenues after accounting for the cost of goods sold (COGS).

12) Net margin = Profit / (Incomes - Expenses). It is the percentage of net income generated from a company's revenue.

In portfolio overview, you can view all combinations of expenses (with or without VAT) and personnel costs (internal or external rate).

How is the Profit calculated

When changing currency on module “Budgets” on a project, the “Profit” value is the result of Incomes – Total costs (Personnel costs + Expenses). For example, let's say that you are using USD currency:

And when a user changes currency from “USD” to “EUR”, all the mentioned values change based on currency rate, apart from “Profit” since that is calculated from “Income – Total costs”, so the result would be as such:

If a user adds Incomes/Expenses in €, it will be calculated in the same way. Every value is based on a specific exchange rate and each exchange rate is related to its date. Therefore, it is important to understand that the “Profit” value is calculated and not exchanged.